1.
Which PDU format is used when bits are received from the network medium by the NIC of a host?
packet
segment
frame
file

3.
What is a benefit of using a layered model for network communications?
fostering competition among device and software vendors by enforcing the compatibility of their products
avoiding possible incompatibility issues by using a common set of developing tools
enhancing network transmission performance by defining targets for each layer
simplifying protocol development by limiting every layer to one function

4.
What method can be used by two computers to ensure that packets are not dropped because too much data is being sent too quickly?
flow control
encapsulation
access method
response timeout

7.
Which protocol is responsible for controlling the size and rate of the HTTP messages exchanged between server and client?
ARP
HTTP
TCP
DHCP 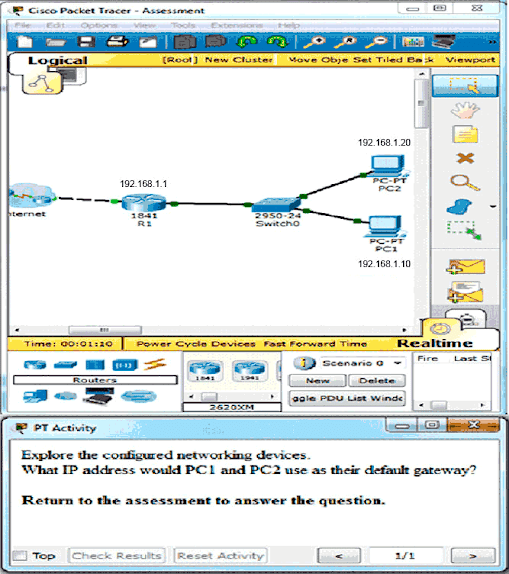 Launch PT Hide and Save PT

9.
A computer in a given network is communicating with a specific group of computers. What type of communication is this?
broadcast
HTTP
multicast
unicast
ARP

10.
What is a function of Layer 4 of the OSI model?
to represent data to the user, including encoding and dialog control
to specify the packet type to be used by the communications
to describe the ordered and reliable delivery of data between source and destination
to apply framing information to the packet, based on the attached media

11.
What is an advantage of network devices using open standard protocols?
Competition and innovation are limited to specific types of products.
A client host and a server running different operating systems can successfully exchange data.
Network communications is confined to data transfers between devices from the same vendor.
Internet access can be controlled by a single ISP in each market.

15.
At which layer of the OSI model would a logical address be encapsulated?
transport layer
physical layer
network layer
data link layer

16.
What is the general term that is used to describe a piece of data at any layer of a networking model?
protocol data unit
segment
frame
packet

17.
Which statement is true about the TCP/IP and OSI models?​
The first three OSI layers describe general services that are also provided by the TCP/IP internet layer.​
The TCP/IP transport layer and OSI Layer 4 provide similar services and functions.
The TCP/IP network access layer has similar functions to the OSI network layer.​
The OSI Layer 7 and the TCP/IP application layer provide identical functions.

19.
A user is viewing an HTML document located on a web server. What protocol segments the messages and manages the segments in the individual conversation between the web server and the web client?
DHCP
HTTP
ARP
TCP

21.
Match the description to the organization. 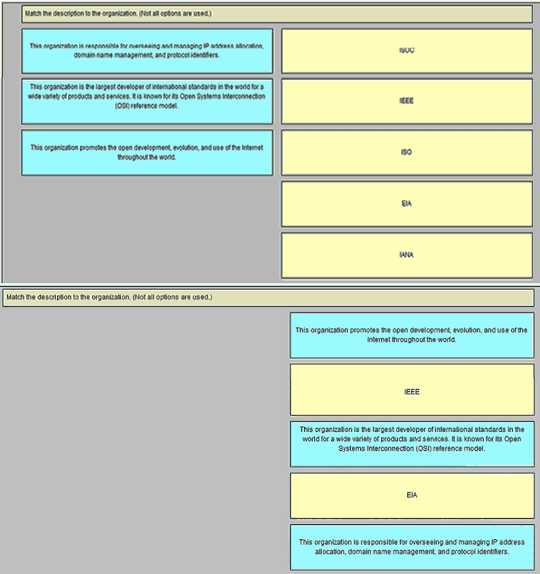