1. What is the purpose of the passive-interface command?

3
Fill in the blank. Do not abbreviate the answer.
The command   «version 2»   is used in RIP router configuration mode to enable the sending of subnet masks with the routing updates.

Refer to the exhibit. OSPF is used in the network. Which path will be chosen by OSPF to send data packets from Net A to Net B?

is supported by RIP version 1
allows for use of both 192.168.1.0/30 and 192.168.1.16/28 subnets in the same topology*
sends subnet mask information in routing updates*
reduces the amount of address space available in an organization
sends complete routing table update to all neighbors

6
What two actions result from entering the network 192.168.1.0 command in RIP configuration mode on a router? (Choose two.)

The neighboring routers are sent a request for routing updates.
The routing table is created in the RAM of the router.
Routing updates are sent through all the interfaces belonging to 192.168.1.0.*
The RIP process is stopped and all existing RIP configurations are erased.
The network address 192.168.1.0 is advertised to the neighbor routers.*

Refer to the exhibit. Based on the partial output from the show ip route command, what two facts can be determined about the RIP routing protocol? (Choose two.)

9
In the context of routing protocols, what is a definition for time to convergence?

the capability to transport data, video, and voice over the same media
the amount of time for the routing tables to achieve a consistent state after a topology change*
a measure of protocol configuration complexity
the amount of time a network administrator needs to configure a routing protocol in a small- to medium-sized network
10
Fill in the blank. Do not abbreviate.
When configuring RIPng, the » default-information originate » command instructs the router to propagate a static default route.​

11
A destination route in the routing table is indicated with a code D. Which kind of route entry is this? 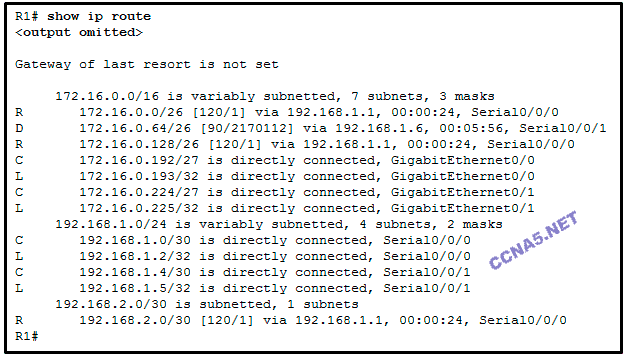 Refer to the exhibit. Which interface will be the exit interface to forward a data packet with the destination IP address 172.16.0.66?

13
Which route is the best match for a packet entering a router with a destination address of 10.16.0.2?

14
Which two requirements are necessary before a router configured with a link-state routing protocol can build and send its link-state packets? (Choose two.)

15
Which two requirements are used to determine if a route can be considered as an ultimate route in a router’s routing table? (Choose two.)

17
Which dynamic routing protocol was developed as an exterior gateway protocol to interconnect different Internet providers?

18
Which route will a router use to forward an IPv4 packet after examining its routing table for the best match with the destination address?

20
Which two events will trigger the sending of a link-state packet by a link-state routing protocol? (Choose two.)