1.
What are two features of a link-state routing protocol? (Choose two.)
The database information for each router is obtained from the same source.
Routers send triggered updates in response to a change.
Routers create a topology of the network by using information from other routers.
Paths are chosen based on the lowest number of hops to the designated router.
Routers send periodic updates only to neighboring routers.

3.
Which switching method drops frames that fail the FCS check?

6.
When a Cisco switch receives untagged frames on a 802.1Q trunk port, which VLAN ID is the traffic switched to by default?

7.
A college marketing department has a networked storage device that uses the IP address 10.18.7.5, TCP port 443 for encryption, and UDP port 4365 for video streaming. The college already uses PAT on the router that connects to the Internet. The router interface has the public IP address of 209.165.200.225/30. The IP NAT pool currently uses the IP addresses ranging from 209.165.200.228-236. Which configuration would the network administrator add to allow this device to be accessed by the marketing personnel from home?

No additional configuration is necessary.

8.
Which statement describes a route that has been learned dynamically?

It is automatically updated and maintained by routing protocols.
It is unaffected by changes in the topology of the network.
It has an administrative distance of 1.
It is identified by the prefix C in the routing table.

9.
A network administrator is explaining to a junior colleague the use of the lt and gt keywords when filtering packets using an extended ACL. Where would the lt or gt keywords be used?

Refer to the exhibit. How did the router obtain the last route that is shown? 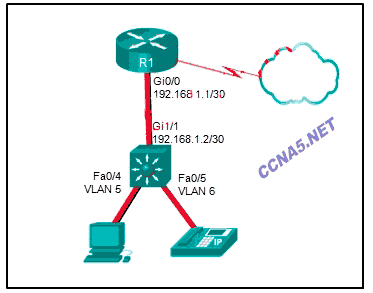 Refer to the exhibit. A Layer 3 switch routes for three VLANs and connects to a router for Internet connectivity. Which two configurations would be applied to the switch? (Choose two.)

the correct answer of question 13 is

1- Each router learns about its own directly connected networks.

2- Each router is responsible for “saying hello” to its neighbors on directly connected networks.

4- Each router floods the LSP to all neighbors, who then store all LSPs received in a database

16.
How is the router ID for an OSPFv3 router determined?

17.
Two employees in the Sales department work different shifts with their laptop computers and share the same Ethernet port in the office. Which set of commands would allow only these two laptops to use the Ethernet port and create violation log entry without shutting down the port if a violation occurs?

18.
Which two factors are important when deciding which interior gateway routing protocol to use? (Choose two.)

20.
What caused the following error message to appear?

21.
Which two statements are characteristics of routed ports on a multilayer switch? (Choose two.)

In a switched network, they are mostly configured between switches at the core and distribution layers.
They support subinterfaces, like interfaces on the Cisco IOS routers.
The interface vlan command has to be entered to create a VLAN on routed ports.
They are used for point-to-multipoint links.
They are not associated with a particular VLAN.

22.
A network administrator is adding ACLs to a new IPv6 multirouter environment. Which IPv6 ACE is automatically added implicitly at the end of an ACL so that two adjacent routers can discover each other?

26.
On a switch that is configured with multiple VLANs, which command will remove only VLAN 100 from the switch?

27.
A router needs to be configured to route within OSPF area 0. Which two commands are required to accomplish this? (Choose two.)

28.
What is a function of the distribution layer?

29.
A small-sized company has 20 workstations and 2 servers. The company has been assigned a group of IPv4 addresses 209.165.200.224/29 from its ISP. What technology should the company implement in order to allow the workstations to access the services over the Internet?

30.
Which three requirements are necessary for two OSPFv2 routers to form an adjacency? (Choose three.)

The link interface subnet masks must match.
The two routers must include the inter-router link network in an OSPFv2 network command.
The OSPFv2 process ID must be the same on each router.

31.
Which three pieces of information does a link-state routing protocol use initially as link-state information for locally connected links? (Choose three.)

32.
What is a disadvantage of NAT?

The internal hosts have to use a single public IPv4 address for external communication.
There is no end-to-end addressing.
The costs of readdressing hosts can be significant for a publicly addressed network.
The router does not need to alter the checksum of the IPv4 packets. 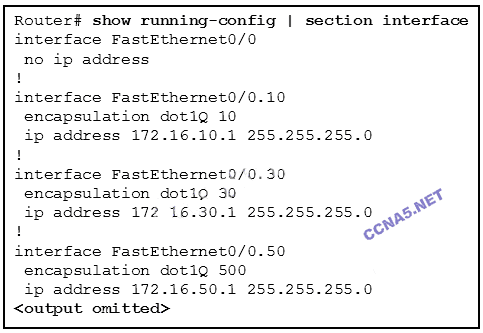 Refer to the exhibit. The partial configuration that is shown was used to configure router on a stick for VLANS 10, 30, and 50. However, testing shows that there are some connectivity problems between the VLANs. Which configuration error is causing this problem?

There is no IP address configured for the FastEthernet 0/0 interface.
A configuration for the native VLAN is missing.
The wrong VLAN has been configured on subinterface Fa0/0.50.
The VLAN IP addresses should belong to the same subnet.

Refer to the exhibit. R1 has been configured as shown. However, PC1 is not able to receive an IPv4 address. What is the problem?

R1 is not configured as a DHCPv4 server.
A DHCP server must be installed on the same LAN as the host that is receiving the IP address.
The ip address dhcp command was not issued on the interface Gi0/1.
The ip helper-address command was applied on the wrong interface.

35.
What best describes the operation of distance vector routing protocols?

They use hop count as their only metric.
They send their routing tables to directly connected neighbors.
They flood the entire network with routing updates.
They only send out updates when a new network is added.

36.
A network administrator is using the router-on-a-stick method to configure inter-VLAN routing. Switch port Gi1/1 is used to connect to the router. Which command should be entered to prepare this port for the task?

37.
Which three advantages are provided by static routing? (Choose three.)

38.
When configuring a switch to use SSH for virtual terminal connections, what is the purpose of the crypto key generate rsa command?

39.
Which information does a switch use to populate the MAC address table? 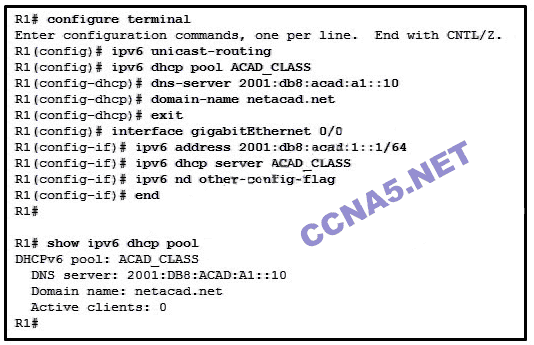 Refer to the exhibit. A network administrator is configuring a router as a DHCPv6 server. The administrator issues a show ipv6 dhcp pool command to verify the configuration. Which statement explains the reason that the number of active clients is 0?

The IPv6 DHCP pool configuration has no IPv6 address range specified.
The state is not maintained by the DHCPv6 server under stateless DHCPv6 operation.
The default gateway address is not provided in the pool.
No clients have communicated with the DHCPv6 server yet.

41.
Open the PT Activity. Perform the tasks in the activity instructions and then answer the question.
What is the problem preventing PC0 and PC1 from communicating with PC2 and PC3? 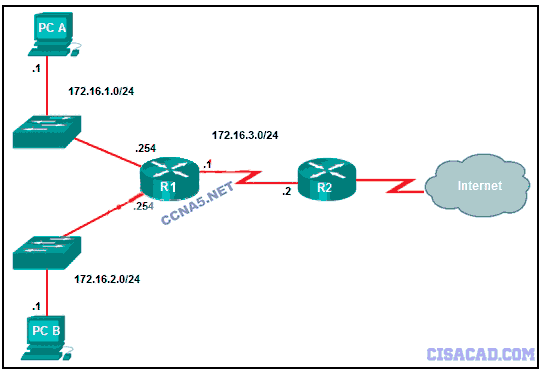 Which command will create a static route on R2 in order to reach PC B?

43.
Which problem is evident if the show ip interface command shows that the interface is down and the line protocol is down?

44.
Which three values or sets of values are included when creating an extended access control list entry? (Choose three.)

A single ACL command and wildcard mask should not be used to specify these particular networks or other traffic will be permitted or denied and present a security risk.

46.
Which kind of message is sent by a DHCP client when its IP address lease has expired?

47.
What happens immediately after two OSPF routers have exchanged hello packets and have formed a neighbor adjacency?

They request more information about their databases.
They negotiate the election process if they are on a multiaccess network.
They exchange DBD packets in order to advertise parameters such as hello and dead intervals.
They exchange abbreviated lists of their LSDBs

49.
What is the purpose of setting the native VLAN separate from data VLANs?

50.
Which command, when issued in the interface configuration mode of a router, enables the interface to acquire an IPv4 address automatically from an ISP, when that link to the ISP is enabled?

51.
Which statement is correct about IPv6 routing?

IPv6 routing is enabled by default on Cisco routers.
IPv6 routes appear in the same routing table as IPv4 routes.
IPv6 uses the link-local address of neighbors as the next-hop address for dynamic routes.
IPv6 only supports the OSPF and EIGRP routing protocols

52.
A router has used the OSPF protocol to learn a route to the 172.16.32.0/19 network. Which command will implement a backup floating static route to this network? 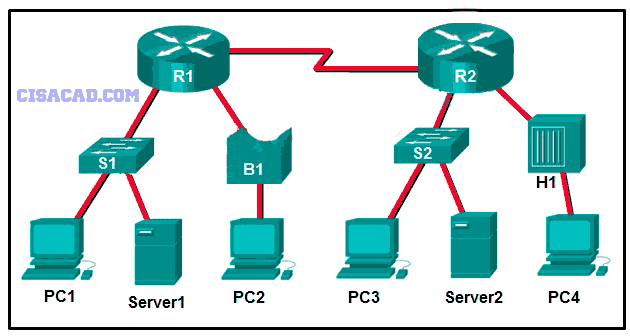 Refer to the exhibit. How many broadcast and collision domains exist in the topology?

54.
Which two commands can be used to verify the content and placement of access control lists? (Choose two.)

55.
Which type of traffic would most likely have problems when passing through a NAT device?

56.
Open the PT Activity. Perform the tasks in the activity instructions and then answer the question.

Which keyword is displayed on the web browser? 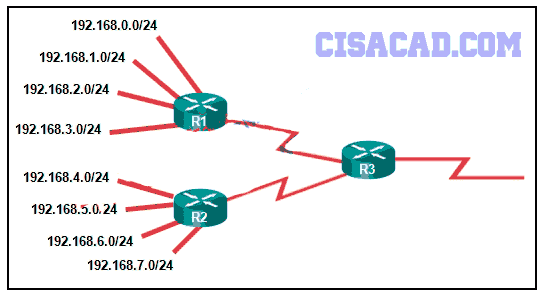 What summary static address would be configured on R1 to advertise to R3?

Fill in the blank.
Static routes are configured by the use of the » ip route» global configuration command.