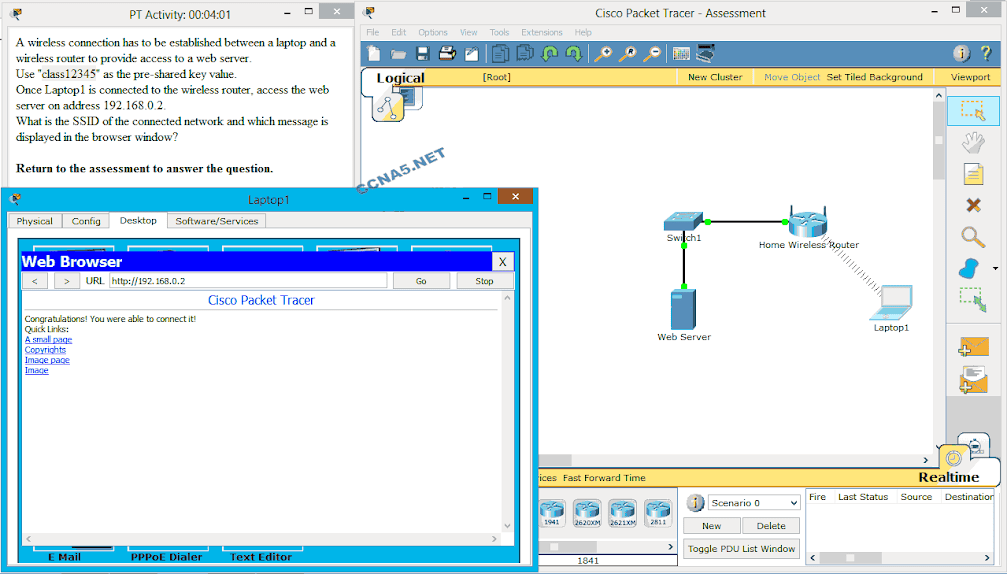 Launch PT   Hide and Save PT
Open the PT Activity. Perform the tasks in the activity instructions and then answer the question.
What is the SSID of the connected network and which message is displayed in the browser window?

2
A administrator wishes to extend the range of the existing IEEE 802.11n network without changing the AP. What can the administrator do to accomplish this?

Upgrade the firmware on the AP.

3
Which security mode is the least secure choice when a home wireless router is configured?

4
Which two roles are typically performed by a wireless router that is used in a home or small business? (Choose two.)

5
Which organization certifies vendors for adherence to the 802.11 standards to improve interoperability of 802.11 products?

6
Which feature of 802.11n wireless access points allows them to transmit data at faster speeds than previous versions of 802.11 Wi-Fi standards did?

7
Which type of wireless topology is created when two or more Basic Service Sets are interconnected by Ethernet?

8
If three 802.11b access points need to be deployed in close proximity, which three frequency channels should be used? (Choose three.)

9
What type of wireless antenna is best suited for providing coverage in large open spaces, such as hallways or large conference rooms?

10
Which three Wi-Fi standards operate in the 2.4GHz range of frequencies? (Choose three.)

11
What is the purpose of the Distributed Coordination Function in an IEEE 802.11 WLAN environment?

It is used to send data over a half-duplex connection.

It is used in a full-duplex environment to detect collisions.

It allows a client to detect whether or not a channel is clear prior to transmission.*

It allows the client to change transmission channels.

13
During which stage of establishing connectivity between a WLAN client and an AP does the client learn the MAC address of the AP?

14
Fill in the blank. Do not use abbreviations.
Ad hoc wireless topologies sometimes can use a feature called »  tethering   » to enable a smartphone to create a personal hotspot.

15
What is an advantage of SSID cloaking?​

It is the best way to secure a wireless network.

Clients will have to manually identify the SSID to connect to the network.​*

SSIDs are very difficult to discover because APs do not broadcast them.​

It provides free Internet access in public locations where knowing the SSID is of no concern.

16
A student uses a laptop to upload an assignment to a file server. Which wireless frame type did the laptop send to locate and associate with the campus access point?

17
Which type of management frame may regularly be broadcast by an AP?

Disable DHCP on the access point and assign static addresses to the wireless clients.

Replace the wireless NICs on the computers that are experiencing slow connections.

Split the traffic between the 2.4 GHz and 5 GHz frequency bands.*

19
For which discovery mode will an AP generate the most traffic on a WLAN?

20
Which statement defines the control frame operation between two stations?

After receiving a data frame, the receiving station will send an ACK frame to the sending station if no errors are found.​*

A station responds to an RTS frame with an ACK frame, thus providing permission for the requesting station to send a data frame.​

A station sends an RTS frame as the first step in a three-way handshake that is required before sending data frames.

Some corporate AP models can operate in either autonomous mode or controller-based mode.*

Controller-based APs are used in the corporate environment, and they are server-dependent devices that require an initial configuration to operate.

Autonomous APs are used only in the home environment, and they incorporate the functions of a router, switch, and AP into one device.​