1
What is a disadvantage of NAT?
There is no end-to-end addressing. *
The router does not need to alter the checksum of the IPv4 packets.
The internal hosts have to use a single public IPv4 address for external communication.
The costs of readdressing hosts can be significant for a publicly addressed network.

Refer to the exhibit. Based on the output that is shown, what type of NAT has been implemented?

4
Which OSPF component is identical in all routers in an OSPF area after convergence?
adjacency database
SPF tree
routing table
link-state database*

6
What are two features of a link-state routing protocol? (Choose two.)
Routers send periodic updates only to neighboring routers.
Routers create a topology of the network by using information from other routers. *
Routers send triggered updates in response to a change. *
The database information for each router is obtained from the same source.
Paths are chosen based on the lowest number of hops to the designated router.

Refer to the exhibit. Which address will R1 use as the source address for all OSPFv3 messages that will be sent to neighbors?

9
An organization needs to provide temporary voice and data services to a new small lab building. They plan to install an access switch in the new lab and connect it using a 100Mb/s FastEthernet trunk link. The network administrator is concerned about the capability of the link to meet quality requirements of the proposed voice and data services. The administrator plans to manage the datalink layer traffic to and from the lab so that trunk usage is optimized. What could the administrator apply to the trunk to help achieve this? 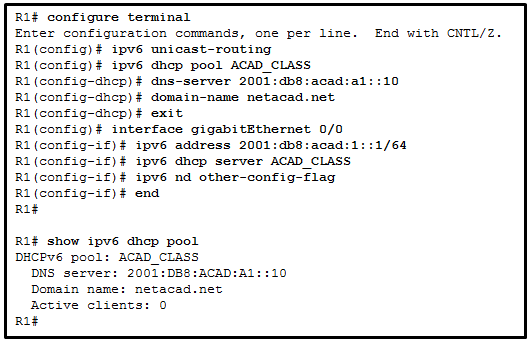 Refer to the exhibit. A network administrator is configuring a router as a DHCPv6 server. The administrator issues a show ipv6 dhcp pool command to verify the configuration. Which statement explains the reason that the number of active clients is 0?

The default gateway address is not provided in the pool.
No clients have communicated with the DHCPv6 server yet.
The IPv6 DHCP pool configuration has no IPv6 address range specified.
The state is not maintained by the DHCPv6 server under stateless DHCPv6 operation.*

11
Which two factors are important when deciding which interior gateway routing protocol to use? (Choose two.)

12
A network administrator is using the router-on-a-stick method to configure inter-VLAN routing. Switch port Gi1/1 is used to connect to the router. Which command should be entered to prepare this port for the task?

13
Which three pieces of information does a link-state routing protocol use initially as link-state information for locally connected links? (Choose three.)

Fill in the blank.
The “ip default-gateway” command is used to configure the default gateway on a switch.

18
Which two commands should be implemented to return a Cisco 3560 trunk port to its default configuration? (Choose two.)

19
Which two methods can be used to provide secure management access to a Cisco switch? (Choose two.)

20
What is a function of the distribution layer?

21
Which statement describes a characteristic of standard IPv4 ACLs? 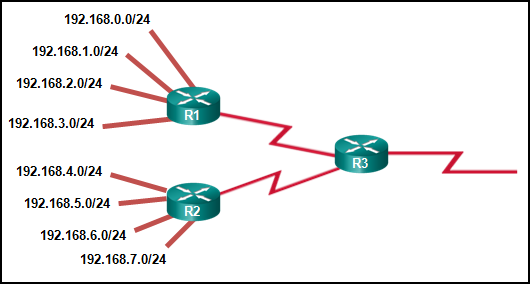 Refer to the exhibit. A network administrator issues the show ip route command on R2. What two types of routes are installed in the routing table? (Choose two.)

Refer to the exhibit. Router R1 has an OSPF neighbor relationship with the ISP router over the 192.168.0.32 network. The 192.168.0.36 network link should serve as a backup when the OSPF link goes down. The floating static route command ip route 0.0.0.0 0.0.0.0 S0/0/1 100 was issued on R1 and now traffic is using the backup link even when the OSPF link is up and functioning. Which change should be made to the static route command so that traffic will only use the OSPF link when it is up?

25
Which two statements are true about half-duplex and full-duplex communications? (Choose two.)

Full duplex offers 100 percent potential use of the bandwidth.
Full duplex allows both ends to transmit and receive simultaneously. *
Half duplex has only one channel.
Full duplex increases the effective bandwidth.*
All modern NICs support both half-duplex and full-duplex communication.

26
What are the two methods that a wireless NIC can use to discover an AP? (Choose two.)

27
What is the purpose of the Spanning Tree Protocol (STP)?

This network has been learned from an internal router within the same area.
This network should be used to forward traffic toward external networks.
This network was learned through summary LSAs from an ABR. *
This network is directly connected to the interface GigabitEthernet0/0.

29
When are EIGRP update packets sent?

30
What are two advantages of EtherChannel? (Choose two.)

Refer to the exhibit. What are two results of issuing the displayed commands on S1, S2, and S3? (Choose two.)

33
Which wireless encryption method is the most secure?

34
Which statement describes a characteristic of the delivery of EIGRP update packets? 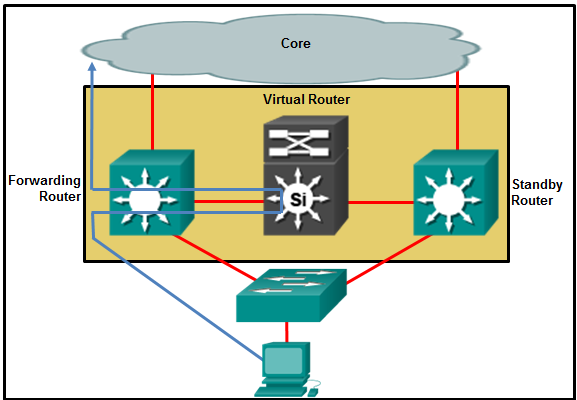 Refer to the exhibit. A network technician is troubleshooting missing OSPFv3 routes on a router. What is the cause of the problem based on the command output?

There is a problem with the OSPFv3 adjacency between the local router and the router that is using the neighbor ID 2.2.2.2. *
The neighbor IDs are incorrect. The interfaces must use only IPv6 addresses to ensure fully synchronized routing databases.
The local router has formed complete neighbor adjacencies, but must be in a 2WAY state for the router databases to be fully synchronized.
The dead time must be higher than 30 for all routers to form neighbor adjacencies.

37
Which statement is true regarding states of the IEEE 802.1D Spanning Tree Protocol?

38
Which wireless network topology is being configured by a technician who is installing a keyboard, a mouse, and headphones, each of which uses Bluetooth?

The outbound interface is set for half duplex.
The MAC address table is corrupt.
This is the normal behavior for a Layer 2 network. *
The VLAN database is full.

Refer to the exhibit. Which two conclusions can be derived from the output? (Choose two.)