1
Which is a clientless VPN solution for mobile workers?

2
For a VPN, which technology provides secure remote access over broadband?

3
A technician is talking to a colleague at a rival company and comparing DSL transfer rates between the two companies. Both companies are in the same city, use the same service provider, and have the same rate/service plan. What is the explanation for why Company A reports higher download speeds than Company B?

Company B shares the conection to the DSLAM with more clients than Company A.
Company A only uses microfilters on branch locations.
Company A is closer to the service provider.*
Company B has a higher volume of POTS voice traffic than Company A.

4
How does an SNMP trap aid network monitoring and management? 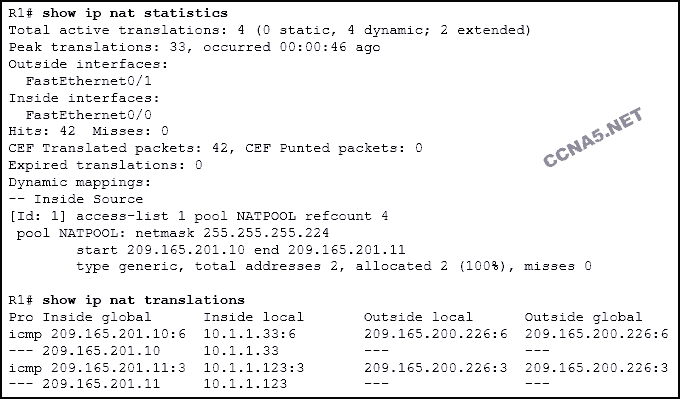 Refer to the exhibit. A PC at address 10.1.1.45 is unable to access the Internet. What is the most likely cause of the problem?

Refer to the exhibit. A network administrator has configured routers RTA and RTB, but cannot ping from serial interface to serial interface. Which layer of the OSI model is the most likely cause of the problem?

7
A user is unable to connect to the Internet. The network administrator decides to use the top-down troubleshooting approach. Which action should the administrator perform first?

Check the patch cable connection from the PC to the wall.
Run the tracert command to identify the faulty device.
Enter an IP address in the address bar of the web browser to determine if DNS has failed.*
Run the ipconfig command to verify the IP address, subnet mask, and gateway on the PC.

Refer to the exhibit. A network administrator has configured router Edge_Router as shown in the output. Connectivity is failing between Edge_Router and a non-Cisco router running Frame Relay. What should be done to repair this Layer 2 connectivity?

Interview departmental administrative assistants and determine if they think load time for web pages has improved.
Compare the hit counts on the company web server for the current week to the values that were recorded in previous weeks.
Determine performance on the intranet by monitoring load times of company web pages from remote sites.
Conduct a performance test and compare with the baseline that was established previously.*

12
Which syslog entry has a severity code that indicates the most serious situation? 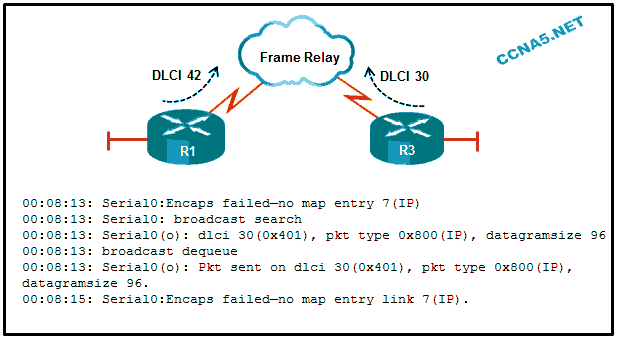 Refer to the exhibit. R3 has the following configuration:

After the command R3# debug frame-relay packet is executed, a ping is issued from R3 to R1 but is unsuccessful. Based on the output of the debug command shown in the graphic and the router configuration, what is the problem?

15
Which WAN technology uses a fixed payload of 48 bytes and is transported across both switched and permanent virtual circuits?

16
Which two statements about NetFlow are true? (Choose two.)

17
Which three items are normally included when a log message is generated by a syslog client and forwarded to a syslog server? (Choose three.)

18
Which statement is true about NCP?

NCP establishes the initial link between PPP devices.
NCP tests the link to ensure that the link quality is sufficient.
Each network protocol has a corresponding NCP.*
Link termination is the responsibility of NCP. 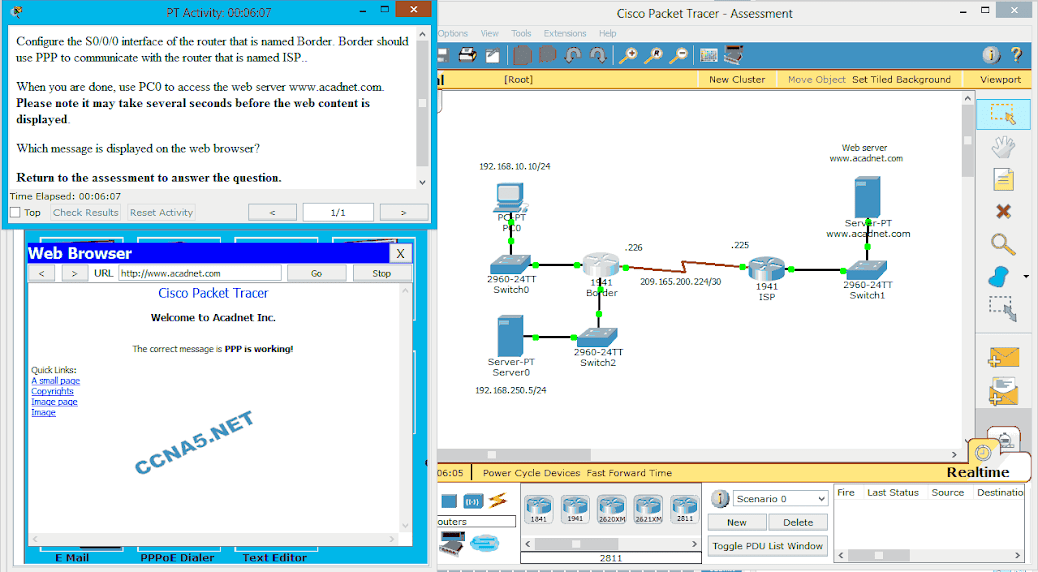 Launch PT Hide and Save PT
Open the PT Activity. Perform the tasks in the activity instructions and then answer the question.
Which message is displayed on the web browser?

21
Which statement is true about the operation of a site-to-site VPN connection?

Refer to the exhibit. What type of Layer 2 encapsulation will be used for connection D on the basis of this configuration on a newly installed router:

23
What are two characteristics of DSL technology? (Choose two.)

Filters and splitters allow POTS and DSL traffic to share the same medium.*
DSL download rates are reduced by large volumes of POTS voice traffic.
Service providers deploy DSL in the local loop of the telephone network.*
DSL is a shared medium that allows many users to share bandwidth available from the DSLAM.
Uploads typically offer larger transfer rates than downloads. 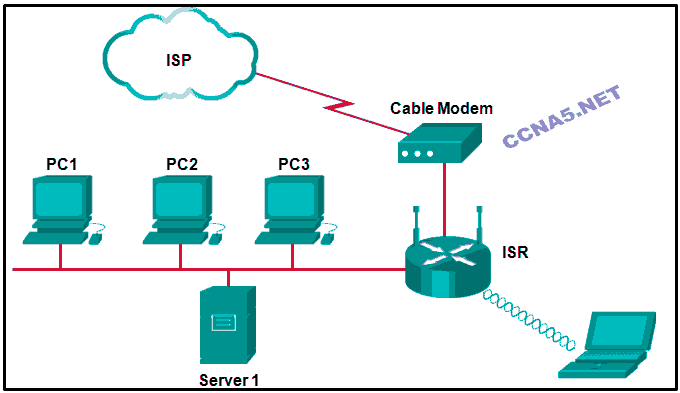 Refer to the exhibit. A small office uses an ISR to provide connectivity for both wired and wireless computers. One day, a sales person who is using a laptop cannot connect to Server1 through the wireless network. A network technician attempts to determine if the problem is on the wireless or the wired network. The technician pings successfully from the wireless laptop to the default gateway IP address on the ISR. What should be the next troubleshooting step?

25
What are two WAN connection enhancements that are achieved by implementing PPPoE? (Choose two.)

Encapsulating Ethernet frames within PPP frames is an efficient use of bandwidth.
DSL CHAP features are included in PPPoE.
PPP enables the ISP to assign an IP address to the customer WAN interface.*
An Ethernet link supports a number of data link protocols.
CHAP enables customer authentication and accounting.*

26
A company has been assigned the 203.0.113.0/27 block of IP addresses by the ISP. The company has over 6000 internal devices. What type of NAT would be most appropriate for the employee workstations of the company?

27
What are two significant benefits that are provided by IPsec? (Choose two.)

28
What makes the Cisco EasyVPN application a useful tool for VPN implementation?

It ensures that remote workers actually use the VPN for connectivity.
It simplifies the configuration tasks for the device that is used as the VPN server.*
It allows a greater variety of network devices to be used for VPN connections.
It provides encryption algorithms unavailable in other systems.
29
What is the purpose of the Cisco Enterprise Architecture?

It provides services and functionality to the core layer by grouping various components into a single component that is located in the access layer.
It replaces the three-layer hierarchical model with a flat network approach.
It reduces overall network traffic by grouping server farms, the management server, corporate intranet, and e-commerce routers in the same layer.
It provides an enterprise-wide system network architecture that helps protect, optimize, and grow the network infrastructure that supports the business processes of a company.*
30
Which basic network module of the Enterprise Architecture is the fundamental component of a campus design?

The inside and outside NAT interfaces have been configured backwards.
The NAT source access list matches the wrong address range.
The address on Fa0/0 should be 64.100.0.1.
The inside global address is not on the same subnet as the ISP.*

32
Which statement best describes a WAN? 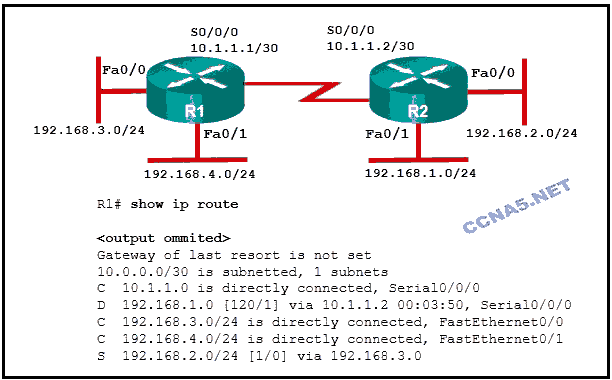 There is no gateway of last resort at R1.
The serial interface between the two routers is down.
The static route for 192.168.2.0 is incorrectly configured.*
A default route is not configured on R1. 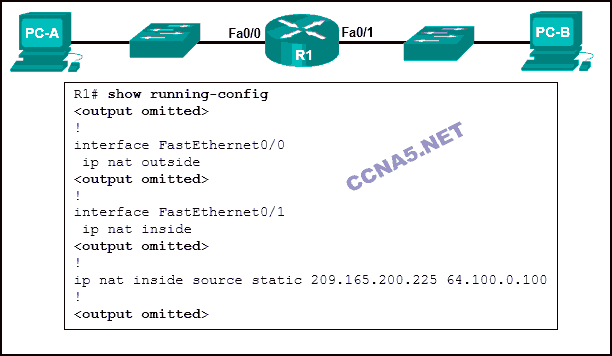 Refer to the exhibit. Based on the configuration of R1, which device is the inside host and what is the inside local address of this host?

35
Which three statements are true regarding the Frame Relay LMI? (Choose three.)

The LMI types supported by Cisco routers are CISCO and IETF.
The LMI uses reserved DLCIs to exchange messages between the DTE and DCE.*
The LMI type must always be manually configured.
The available LMI types are CHAP and PAP.
The LMI provides a virtual circuit (VC) status mechanism.*
The LMI type configured on the router must match the one used on the Frame Relay switch.*

36
What type of installation is needed to view syslog messages?

38
What is the relationship between the DE and the CIR in Frame Relay?

39
What can cause a reduction in available bandwidth on a cable broadband connection?

An incorrect default gateway is set on the router.
Keepalives are not being sent by the remote device.*
A network is missing from the routing protocol configuration.
The clock rate is not set on the DTE.
The encapsulation on the Serial0 interface is incorrect.*

Launch PT Hide and Save PT
Open the PT activity. Perform the tasks in the activity instructions and then answer the question.
What is the IP address or range of IP addresses that are used as the inside global address for packets that originate from PC1 and are going to the server?​

42
Which three algorithms can be used to encrypt user data in an IPSec VPN framework? (Choose three.)

43
An administrator needs to configure a router so that internal network servers are accessible from the Internet. Each server is configured with a private IPv4 address. What type of NAT should the administrator configure?

45
What are three parameters that are used by NetFlow to classify traffic? (Choose three.)

46
Which two products are part of the Cisco Collaboration Architecture? (Choose two.)

47
How many addresses will be available for dynamic NAT translation when a router is configured with the following commands?

48
In the Cisco Enterprise Architectures network design approach what is the purpose of the enterprise edge module?

to provide high-speed connectivity and protection for servers
to provide Internet, VPN, and WAN connections*
to forward traffic from one local network to another
to provide access to IP telephony services, wireless controller services, and unified services

49
How does STDM allocate bandwidth on a serial connection?

It ensures that bandwidth is allocated to each channel or time slot regardless of whether the station using the channel has data to transmit.
It ensures each of the time slices are assigned to individual conversations.
It keeps track of conversations that require extra bandwidth. It then dynamically reassigns unused time slices on an as-needed basis.*
It statically assigns bandwidth based upon pre-assigned time slots.

Refer to the exhibit. While planning an upgrade, a network administrator uses the Cisco NetFlow utility to analyze data flow in the current network. What generated the most packets?