1. How is “tunneling” accomplished in a VPN?

New headers from one or more VPN protocols encapsulate the original packets.
All packets between two hosts are assigned to a single physical medium to ensure that the packets are kept private.
Packets are disguised to look like other types of traffic so that they will be ignored by potential attackers.
A dedicated circuit is established between the source and destination devices for the duration of the connection.

Refer to the exhibit. Which IP address would be configured on the tunnel interface of the destination router?

IPsec works at Layer 3, but can protect traffic from Layer 4 through Layer 7.
IPsec uses algorithms that were developed specifically for that protocol.
IPsec implements its own method of authentication.
IPsec is a Cisco proprietary standard.

5. What is an IPsec protocol that provides data confidentiality and authentication for IP packets?

6. Which three statements describe the building blocks that make up the IPsec protocol framework? (Choose three.)

7. What key question would help determine whether an organization should use an SSL VPN or an IPsec VPN for the remote access solution of the organization?

Is a Cisco router used at the destination of the remote access tunnel?
What applications or network resources do the users need for access?
Are both encryption and authentication required?
Do users need to be able to connect without requiring special VPN software?

8. What is the purpose of a message hash in a VPN connection?

9. A network design engineer is planning the implementation of a cost-effective method to interconnect multiple networks securely over the Internet. Which type of technology is required?

10. What is one benefit of using VPNs for remote access?

11. Which statement describes a characteristic of IPsec VPNs?

IPsec can secure traffic at Layers 1 through 3.
IPsec works with all Layer 2 protocols.
IPsec encryption causes problems with routing.
IPsec is a framework of Cisco proprietary protocols

12. What is the purpose of the generic routing encapsulation tunneling protocol?

13. Which algorithm is an asymmetrical key cryptosystem?

14. A network design engineer is planning the implementation of an IPsec VPN. Which hashing algorithm would provide the strongest level of message integrity?

16. Which statement describes a feature of site-to-site VPNs?

Internal hosts send normal, unencapsulated packets.
VPN client software is installed on each host.
The VPN connection is not statically defined.
Individual hosts can enable and disable the VPN connection.

19. Which function of IPsec security services allows the receiver to verify that the data was transmitted without being changed or altered in any way? 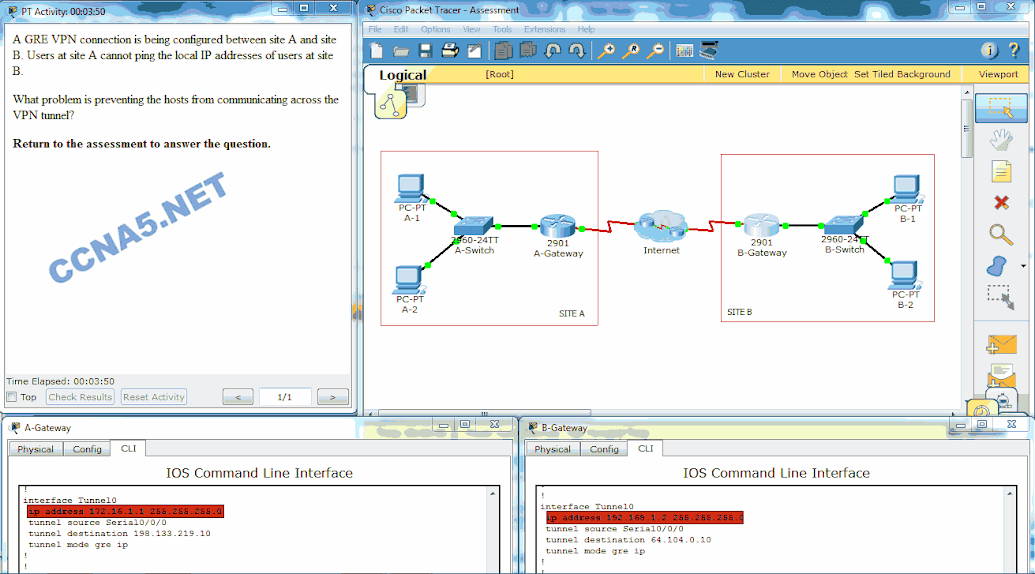 Open the PT Activity. Perform the tasks in the activity instructions and then answer the question. What problem is preventing the hosts from communicating across the VPN tunnel?

21. What is the purpose of utilizing Diffie-Hellman (DH) algorithms as part of the IPsec standard?

Refer to the exhibit. A tunnel was implemented between routers R1 and R2. Which two conclusions can be drawn from the R1 command output? (Choose two.)

24. Which remote access implementation scenario will support the use of generic routing encapsulation tunneling?