1. Users are reporting longer delays in authentication and in accessing network resources during certain time periods of the week. What kind of information should network engineers check to find out if this situation is part of a normal network behavior?

2. A team of engineers has identified a solution to a significant network problem. The proposed solution is likely to affect critical network infrastructure components. What should the team follow while implementing the solution to avoid interfering with other processes and infrastructure?

4. A user reports that the workstation cannot connect to a networked printer in the office in order to print a report created with word processing software. Which troubleshooting action by the helpdesk technician would follow the divide-and-conquer approach?

5. A network engineer is troubleshooting a network problem and can successfully ping between two devices. However, Telnet between the same two devices does not work. Which OSI layers should the administrator investigate next?

Refer to the exhibit. Which two statements describe the results of entering these commands?(Choose two.)

8. An administrator is troubleshooting an Internet connectivity problem on a router. The output of the show interfaces gigabitethernet 0/0 command reveals higher than normal framing errors on the interface that connects to the Internet. At what layer of the OSI model is the problem likely occurring?

10. A user reports that after an OS patch of the networking subsystem has been applied to a workstation, it performs very slowly when connecting to network resources. A network technician tests the link with a cable analyzer and notices that the workstation sends an excessive number of frames smaller than 64 bytes and also other meaningless frames. What is the possible cause of the problem?

The ip access-class command is missing.
The password is misconfigured on the console line.
The transport input command is incorrect on the vty lines.
A standard ACL is possibly blocking the workstation from access to the router.
An extended ACL that is referencing the port argument for SSH is misconfigured.

12. A user in a large office calls technical support to complain that a PC has suddenly lost connectivity to the network. The technician asks the caller to talk to nearby users to see if other machines are affected. The caller reports that several immediate neighbors in the same department have a similar problem and that they cannot ping each other. Those who are seated in other departments have connectivity. What should the technician check as the first step in troubleshooting the issue?

13. After cables were reconnected to a switch in a wiring closet, several PCs that had been previously configured manually can no longer access resources outside the local network. The PC configurations were not altered in the process and resources on the local network can still be accessed. What is a possible cause of the problem?

The cabling to the PCs is faulty.
The PCs are no longer on the correct VLAN.
The DHCP server has been misconfigured.
The DNS configuration on the PCs is incorrect.

Refer to the exhibit. On the basis of the output, which two statements about network connectivity are correct? (Choose two.)

Use the » ARP   » cache to verify IPv4 address to Layer 2 Ethernet address mappings on a host computer.

16. Which two specialized troubleshooting tools can monitor the amount of traffic that passes through a switch? (Choose two.)

17. A group of Windows PCs in a new subnet has been added to an Ethernet network. When testing the connectivity, a technician finds that these PCs can access local network resources but not the Internet resources. To troubleshoot the problem, the technician wants to initially confirm the IP address and DNS configurations on the PCs, and also verify connectivity to the local router. Which three Windows CLI commands and utilities will provide the necessary information? (Choose three.)

18. A company is setting up a web site with SSL technology to protect the authentication credentials required to access the web site. A network engineer needs to verify that the setup is correct and that the authentication is indeed encrypted. Which tool should be used?

19. In which step of gathering symptoms does the network engineer determine if the problem is at the core, distribution, or access layer of the network?

20. A network technician is troubleshooting an email connection problem. Which question to the end-user will provide clear information to better define the problem?

How big are the emails you tried to send?
When did you first notice your email problem?
Is your email working now?
What kind of equipment are you using to send emails?

21. A network engineer issues the show cdp neighbor command on several network devices during the process of network documentation. What is the purpose of performing this command?

Refer to exhibit. A network engineer is troubleshooting a WAN connectivity problem. A ping to a remote router is successful and an attempt to telnet to the same router displays the exhibited output. What does the output verify?

A Telnet password has not been configured on the remote router.
The transport layer is connecting successfully.
The web server service is password protected.
The remote router IPv6 address is incorrect.

23. When should a network performance baseline be measured?

24. Which number represents the most severe level of syslog logging? 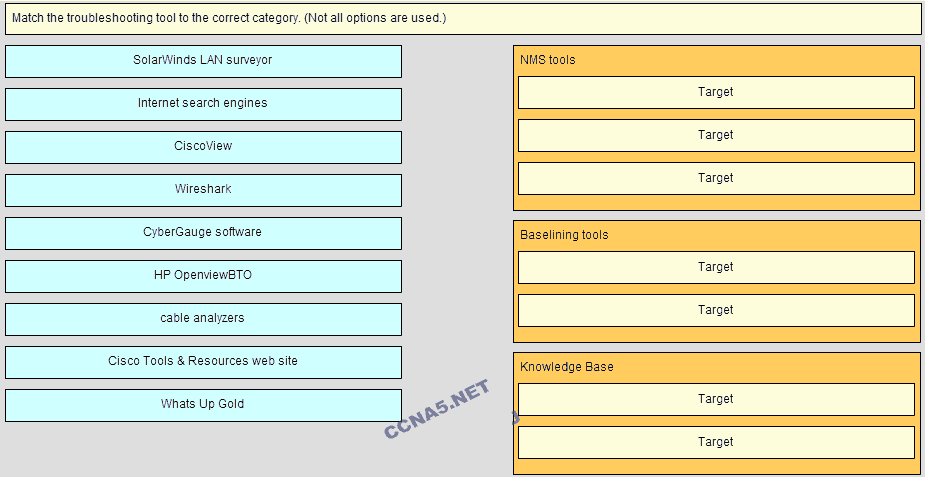