1
Which three layers of the OSI model provide similar network services to those provided by the application layer of the TCP/IP model? (Choose three.)

2
Which two tasks are functions of the presentation layer? (Choose two.)

3
Select three protocols that operate at the Application Layer of the OSI model. (Choose three.)

5
What are two characteristics of peer-to-peer networks? (Choose two.)

6
What is an example of network communication that uses the client-server model?

7
What is an advantage for small organizations of adopting IMAP instead of POP?

Messages are kept in the mail servers until the client manually deletes them.*
When the user connects to a POP server, copies of the messages are kept in the mail server for a short time, but IMAP keeps them for a long time.
IMAP sends and retrieves email, but POP only retrieves email.
POP only allows the client to store messages in a centralized way, while IMAP allows distributed storage.

8
Which two actions are taken by SMTP if the destination email server is busy when email messages are sent? (Choose two.)

SMTP sends an error message back to the sender and closes the connection.
SMTP tries to send the messages at a later time.*
SMTP will discard the message if it is still not delivered after a predetermined expiration time.
SMTP periodically checks the queue for messages and attempts to send them again.*
SMTP sends the messages to another mail server for delivery.

9
Which application layer protocol uses message types such as GET, PUT, and POST?

10
A DHCP-enabled client PC has just booted. During which two steps will the client PC use broadcast messages when communicating with a DHCP server? (Choose two.)
DHCPDISCOVER*
DHCPACK
DHCPOFFER
DHCPREQUEST*
DHCPNAK

12
Which DNS server in the DNS hierarchy would be considered authoritative for the domain name records of a company named netacad?

14
Which phrase describes an FTP daemon?

15
What is true about the Server Message Block protocol?

16
When would it be more efficient to use SMB to transfer files instead of FTP?

17
Fill in the blank.
What is the acronym for the protocol that is used when securely communicating with a web server?     « HTTPS «​

Hypertext Transfer Protocol Secure (HTTPS)
is the protocol that is used for accessing or
posting web server information using a secure communication channel. 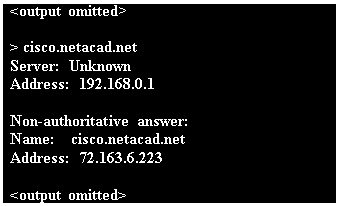 Fill in the blank.
Refer to the exhibit. What command was used to resolve  a given host name by querying the name servers?   « nslookup »

A user can manually query the name servers to resolve
a given host name using the nslookup command.​
Nslookup is both a command and a utility.​

a message that is used to acknowledge that the lease is successful
21
Question as presented: 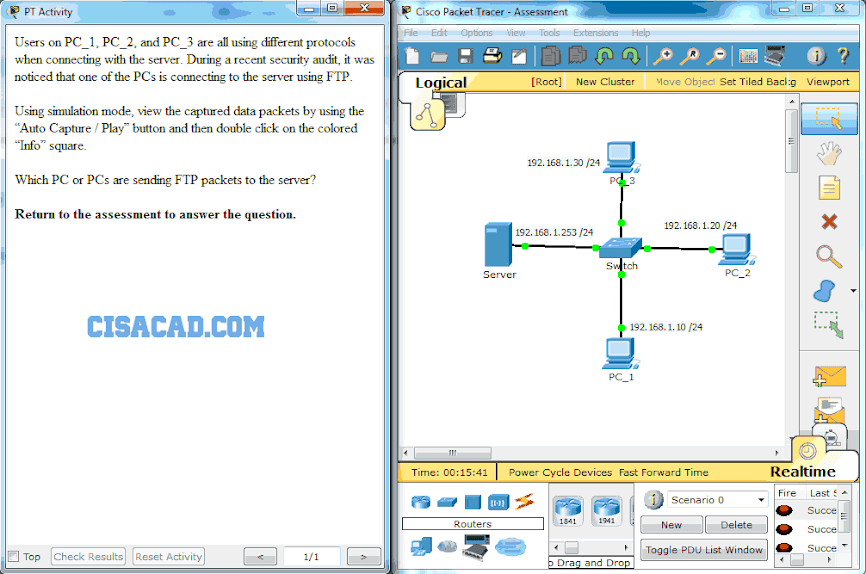 Perform the tasks in the activity instructions and then answer the question.

Which PC or PCs are sending FTP packets to the server?