1. What type of IPv6 address is required as a minimum on IPv6 enabled interfaces?

2
In order for packets to be sent to a remote destination, what three pieces of information must be configured on a host? (Choose three.)

3
What two pieces of information are displayed in the output of the show ip interface brief command? (Choose two.) 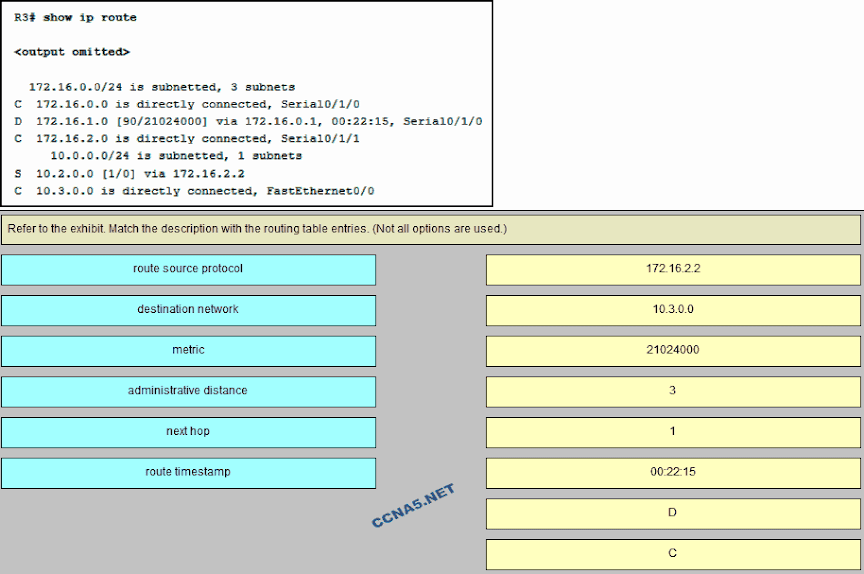 5
Which two items are used by a host device when performing an ANDing operation to determine if a destination address is on the same local network? (Choose two.) 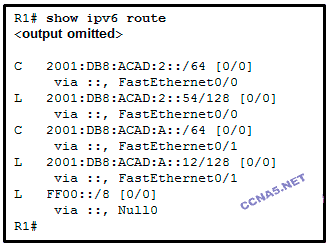 Refer to the exhibit. A network administrator issues the show ipv6 route command on R1. What two conclusions can be drawn from the routing table? (Choose two.)

Refer to the exhibit. What is the purpose of the highlighted field in the line that is displayed from the show ip route command?

9
What are two functions of a router? (Choose two.)

It manages the VLAN database.
It increases the size of the broadcast domain.
It controls the flow of data via the use of Layer 2 addresses.
It determines the best path to send packets.*
It connects multiple IP networks.*

10
A packet moves from a host on one network to a device on a remote network within the same company. If NAT is not performed on the packet, which two items remain unchanged during the transfer of the packet from source to destination? (Choose two.) 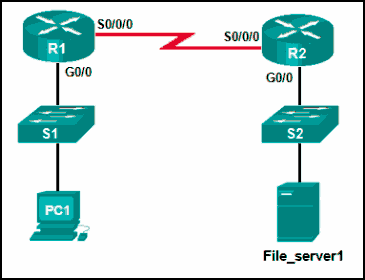 Refer to the exhibit. PC1 attempts to connect to File_server1 and sends an ARP request to obtain a destination MAC address. Which MAC address will PC1 receive in the ARP reply?

12
A network administrator configures the interface fa0/0 on the router R1 with the command ip address 172.16.1.254 255.255.255.0. However, when the administrator issues the command show ip route, the routing table does not show the directly connected network. What is the possible cause of the problem?

The interface fa0/0 has not been activated.*
No packets with a destination network of 172.16.1.0 have been sent to R1.
The subnet mask is incorrect for the IPv4 address.
The configuration needs to be saved first.

13
Which command is used to configure an IPv6 address on a router interface so that the router will combine a manually specified network prefix with an automatically generated interface identifier?

14
Fill in the blank.
When a router receives a packet, it examines the destination address of the packet and looks in the » routing » table to determine the best path to use to forward the packet. 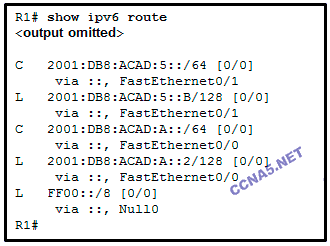 Refer to the exhibit. A network administrator issues the show ipv6 route command on R1. Which two types of routes are displayed in the routing table? (Choose two.)

17
What address changes as a packet travels across multiple Layer 3 Ethernet hops to its final destination? 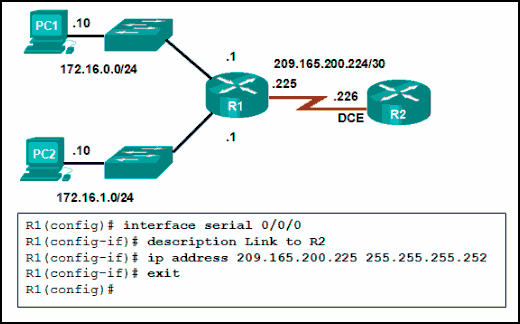 21
What is one feature that distinguishes routers from Layer 2 switches?

22
Which statement describes a route that has been learned dynamically?

It is identified by the prefix C in the routing table.
It is automatically updated and maintained by routing protocols.*
It is unaffected by changes in the topology of the network.
It has an administrative distance of 1.

Refer to the exhibit. A network administrator issues the show ip route command on R2. What two types of routes are installed in the routing table? (Choose two.)

24
When a computer is pinging another computer for the first time, what type of message does it place on the network to determine the MAC address of the other device?