1
A network administrator has just changed the router ID on a router that is working in an OSPFv2 environment. What should the administrator do to reset the adjacencies and use the new router ID?

Refer to the exhibit. What three conclusions can be drawn from the displayed output? (Choose three.)

The DR can be reached through the GigabitEthernet 0/0 interface.*

There have been 9 seconds since the last hello packet sent.*

The BDR has three neighbors.

The router ID values were not the criteria used to select the DR and the BDR.*

This interface is using the default priority.

3
When checking a routing table, a network technician notices the following entry:

What information can be gathered from this output?

This route is a propagated default route.*

The route is located two hops away.

4
Which command will a network engineer issue to verify the configured hello and dead timer intervals on a point-to-point WAN link between two routers that are running OSPFv2?

5
A network engineer has manually configured the hello interval to 15 seconds on an interface of a router that is running OSPFv2. By default, how will the dead interval on the interface be affected?

The dead interval will not change from the default value.

The dead interval will now be 30 seconds.

The dead interval will now be 15 seconds.

The dead interval will now be 60 seconds.* 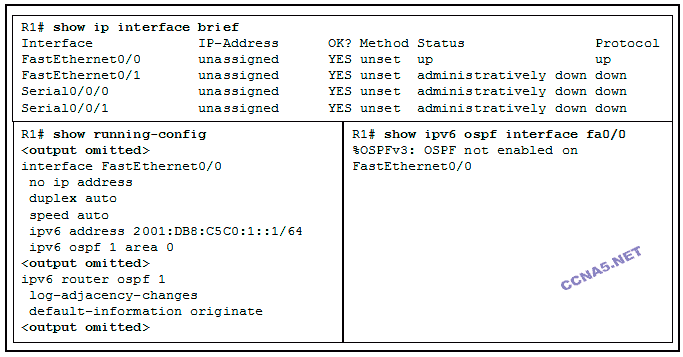 Refer to the exhibit. An administrator is trying to configure R1 to run OSPFv3 but the neighbor adjacency is not forming with the router connected to Fa0/0. What is the cause of the problem?

FastEthernet0/0 has been configured as a passive interface.

No router ID has been configured.*

A link-local address has not been configured on interface FastEthernet0/0.

The OSPF process ID and area values are backwards in the interface configuration.

Refer to the exhibit. A network administrator has configured the OSPF timers to the values that are shown in the graphic. What is the result of having those manually configured timers?

The R1 dead timer expires between hello packets from R2.*

The neighbor adjacency has formed.

R1 automatically adjusts its own timers to match the R2 timers.

The hello timer on R2 expires every ten seconds.
8
When OSPFv2 neighbors are establishing adjacencies, in which state do they elect a DR and BDR router? 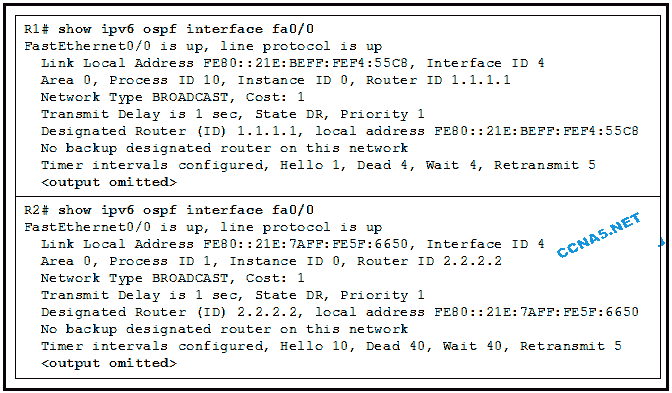 Refer to the exhibit. R1 and R2 are connected to the same LAN segment and are configured to run OSPFv3. They are not forming a neighbor adjacency. What is the cause of the problem?

The OSPFv3 process IDs of R1 and R2 are different.

The timer intervals of R1 and R2 do not match.*

The IPv6 addresses of R1 and R2 are not in the same subnet. 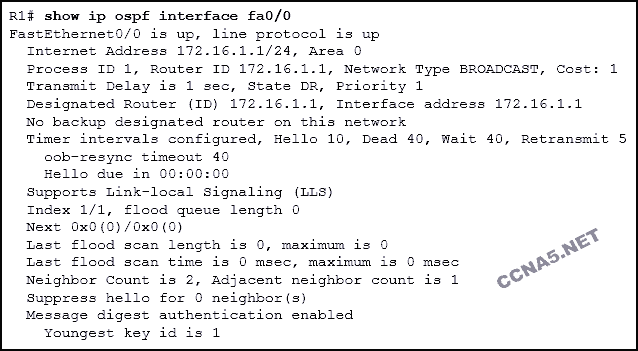 Refer to the exhibit. What kind of OSPF authentication has been configured on this interface?

MD5 does not send the password to the neighbor router.*

MD5 requires passwords that are at least 8 characters long.

MD5 uses both a username and a password to authenticate the neighbor.

MD5 employs IPsec to keep the updates from being intercepted.
12
Which two pieces of information are used by the OSPF MD5 algorithm to generate a signature? (Choose two.)

13
A network engineer is troubleshooting convergence and adjacency issues in an OSPFv2 network and has noted that some expected network route entries are not displayed in the routing table. Which two commands will provide additional information about the state of router adjacencies, timer intervals, and the area ID? (Choose two.)

OSPF uses the bandwidth value to compute routes for its routing table.*

All serial interfaces default to a value of 1.544 Mb/s.

Each side of an OSPF serial link should be configured with a unique value.

Bandwidth value affects the actual speed of the link.

15
A network engineer is troubleshooting an OSPFv2 network and discovers that two routers connected by a point-to-point WAN serial link are not establishing an adjacency. The OSPF routing process, network commands and area ID are all confirmed as correct, and the interfaces are not passive. Testing shows that the cabling is correct, that the link is up, and pings between the interfaces are successful. What is most likely the problem?

A clock rate has not been set on the DCE interface of the serial link.

The OSPFv2 process IDs on each router do not match.

A DR election has not taken place.

The subnet masks on the two connected serial interfaces do not match.*

16
A network engineer is troubleshooting OSPFv2 routing issues on two connected routers. Which two requirements to form an adjacency need to be verified? (Choose two.)

Verify that the interfaces that connect the two routers are in the same area.*

Verify that one of the routers is the DR or BDR and the other router a DRother.

Verify that one of the interfaces that connects the two routers is active and the other passive.

Verify that the interfaces that connect the two routers are in the same subnet.*

Verify that both routers are using the same OSPFv2 process ID.

17
Which command is used to verify that OSPF is enabled and also provides a list of the networks that are being advertised by the network?​

Refer to the exhibit. Four routers are connected to an Ethernet LAN segment and are configured to run OSPFv3. However, none of the routers are receiving routing updates. What is the cause of the problem?

The routers are using IPv6 link local addresses to communicate.

The network type has been set to BROADCAST instead of NBMA.

The routers are using IPv4 addresses for router IDs.

All of the routers have an OSPFv3 interface priority of 0.* 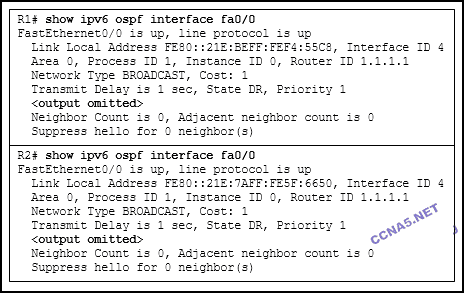 Refer to the exhibit. These two routers are configured to run OSPFv3 but they are not forming a neighbor adjacency. What is the cause of the problem?

The routers do not have global IPv6 addresses that are configured on the Fa0/0 interfaces.

The routers have both been elected as the DR.

The routers are configured with the same router ID.*

The routers have the same priority.

20
A network engineer suspects that OSPFv3 routers are not forming neighbor adjacencies because there are interface timer mismatches. Which two commands can be issued on the interface of each OSFPv3 router to resolve all timer mismatches? (Choose two.) 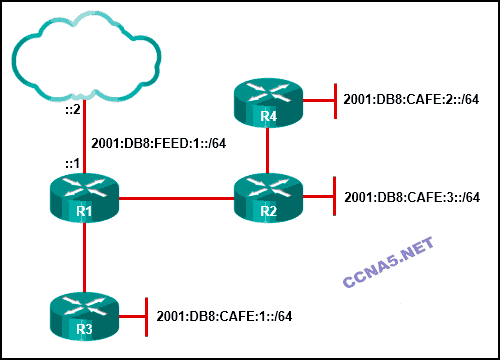 Refer to the exhibit. Fill in the blank. Do not use abbreviations.
The command » show ipv6 route » can be issued on router R2 to verify the propagation of a static default route from R1 to R2.

22
Fill in the blank. Do not use abbreviations.
When IPv4 and OSPFv2 are being used, the command « show ip ospf neighbor » is used to verify that a router has formed an adjacency with its neighboring routers.

[+] Order does not matter within this group.