Place the options in the following order:
first
– not scored –
third
second

Refer to the exhibit. Which command should be used to configure EIGRP to only advertise the network that is attached to the gigabit Ethernet 0/1 interface?

3
What is the purpose of using protocol-dependent modules in EIGRP?

to use different transport protocols for different packets

4
Which statement describes a characteristic of the delivery of EIGRP update packets?

5
A new network administrator has been asked to verify the metrics that are used by EIGRP on a Cisco device. Which two EIGRP metrics are measured by using static values on a Cisco device? (Choose two.)

6
Which protocol is used by EIGRP to send hello packets?

7
Which destination MAC address is used when a multicast EIGRP packet is encapsulated into an Ethernet frame?

Refer to the exhibit. R2 has two possible paths to the 192.168.10.4 network. What would make the alternate route meet the feasibility condition?

an administrative distance less than 170

192.168.71.0*
11
If all router Ethernet interfaces in an EIGRP network are configured with the default EIGRP timers, how long will a router wait by default to receive an EIGRP packet from its neighbor before declaring the neighbor unreachable?

12
Which command or commands must be entered on a serial interface of a Cisco router to restore the bandwidth to the default value of that specific router interface?

13
Which EIGRP route would have the preferred administrative distance?

an external route that is redistributed from RIP

an external route that is redistributed from OSPF

14
How do EIGRP routers establish and maintain neighbor relationships?

by comparing known routes to information received in updates

16
What is indicated when an EIGRP route is in the passive state?

The route has the highest path cost of all routes to that destination network.

The route is a feasible successor and will be used if the active route fails.

The route is viable and can be used to forward traffic.*

There is no activity on the route to that network.

The route must be confirmed by neighboring routers before it is put in the active state.

17
Which three metric weights are set to zero by default when costs in EIGRP are being calculated? (Choose three.)

18
Why would a network administrator use a wildcard mask in the network command when configuring a router to use EIGRP?

to send a manual summarization

to exclude some interfaces from the EIGRP process*

to subnet at the time of the configuration

to lower the router overhead

19
Which table is used by EIGRP to store all routes that are learned from EIGRP neighbors?

20
Where are EIGRP successor routes stored?

only in the routing table

in the routing table and the topology table*

only in the neighbor table

in the routing table and the neighbor table 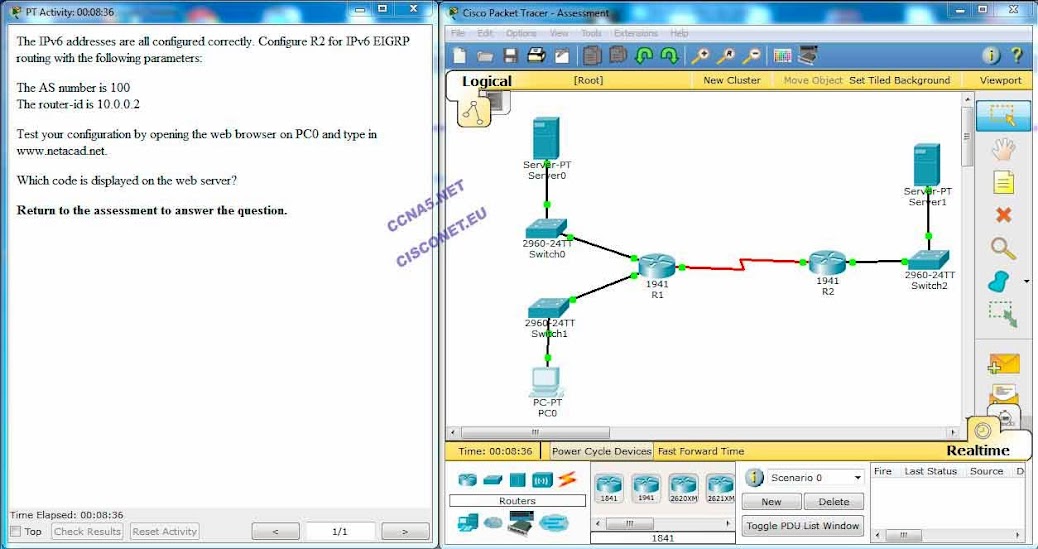 Launch PT – Hide and Save PT
Open the PT Activity. Perform the tasks in the activity instructions and then answer the question.

Which code is displayed on the web server?

22
Which command is used to display the bandwidth of an interface on an EIGRP-enabled router?

23
Fill in the blank.
In an EIGRP topology table, a route that is in a/an » active » state will cause the Diffusing Update Algorithm to send EIGRP queries that ask other routers for a path to this network.