1
Which command can be issued on a router to verify that automatic summarization is enabled?

Refer to the exhibit. Router R3 is receiving multiple routes through the EIGRP routing protocol. Which statement is true about the implementation of summarization in this network?

Automatic summarization is disabled on a per-interface basis.

Automatic summarization is disabled on R3.* 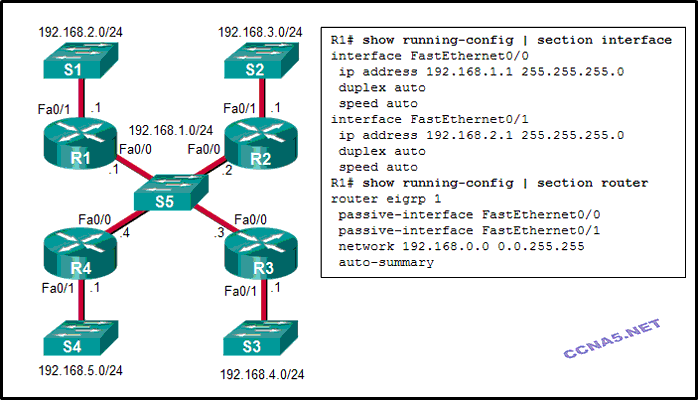 Refer to the exhibit. Considering that R2, R3, and R4 are correctly configured, why did R1 not establish an adjacency with R2, R3, and R4?

because the automatic summarization is enabled on R1

5
In which IOS CLI mode must a network administrator issue the maximum-paths command to configure load balancing in EIGRP?​

6
Two routers, R1 and R2, have established an EIGRP neighbor relationship, but there is still a connectivity problem. Which issue could be causing this problem?​

automatic summarization that is disabled on both routers 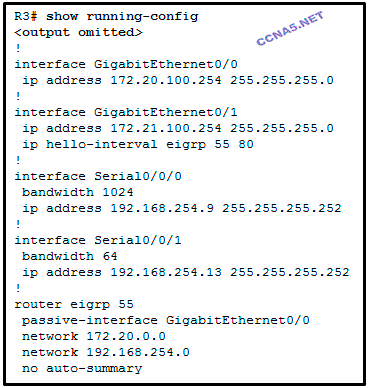 The GigabitEthernet 0/1 interface is not participating in the EIGRP process.*

The hello timer has been modified on interface GigabitEthernet 0/1 of R3 and not on the neighbor, causing a neighbor adjacency not to form.

The passive-interface command is preventing neighbor relationships on interface GigabitEthernet 0/0.

The GigabitEthernet interfaces are not limiting the flow of EIGRP message information and are being flooded with EIGRP traffic.

8
In which scenario will the use of EIGRP automatic summarization cause inconsistent routing in a network?

when there is no common subnet that exists between neighboring routers

when there is no adjacency that is established between neighboring routers 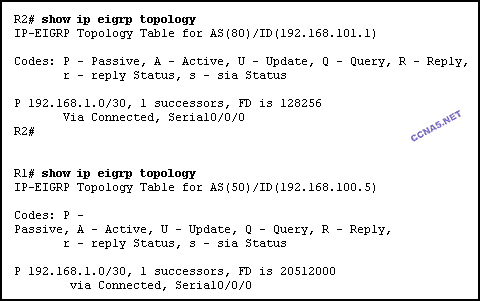 What action should be taken to solve this problem?

Configure the same hello interval between the routers.

Enable the serial interfaces of both routers.

Configure both routers with the same EIGRP process ID.*

Refer to the exhibit. Which statement accurately reflects the configuration of routing on the HQ router?

A static default route was configured on this router.*

A static default route was learned via EIGRP routing updates.

The static default route should be redistributed using the default-information originate command.​ 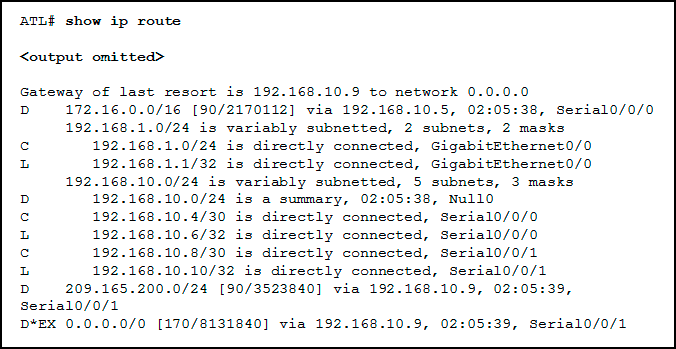 Refer to the exhibit. Which statement is supported by the output?

The route to 192.168.1.1 represents the configuration of a loopback interface.

A static default route has been manually configured on this router.

A default route is being learned through an external process.*

Summarization of routes has been manually configured. 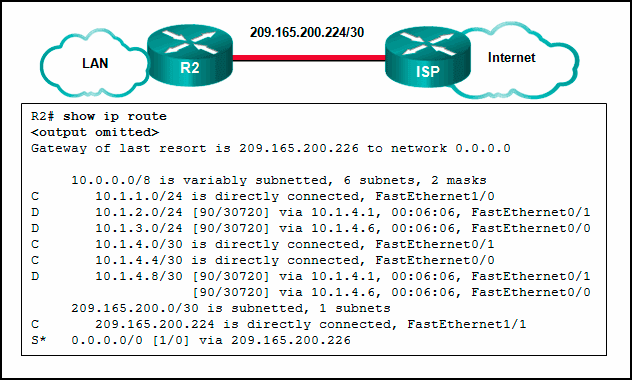 Refer to the exhibit. Which two routes will be advertised to the router ISP if autosummarization is disabled? (Choose two.)

Refer to the exhibit. A network administrator has configured EIGRP authentication between routers R1 and R2. After the routing tables are reviewed, it is noted that neither router is receiving EIGRP updates. What is a possible cause for this failure?

The same autonomous system numbers must be used in the interface configurations of each router.*

The key string should be used in interface mode instead of the key chain.

The same number of key strings must be used on each router.

The same key chain name must be used on each router.

The authentication configuration is correct, issue the show ip eigrp neighbors command to troubleshoot the issue.

14
Two routers, R1 and R2, share a 64 kb/s link. An administrator wants to limit the bandwidth used by EIGRP between these two routers to 48 kb/s. Which command is used on both routers to configure the new bandwidth setting?

It decreases the number of entries in the routing table.*

It reduces the frequency of routing updates.*

It ensures that traffic for multiple subnets uses one path through the internetwork.*

It maximizes the number of routes in the routing table.

It improves reachability in discontiguous networks.

It increases the size of routing updates. 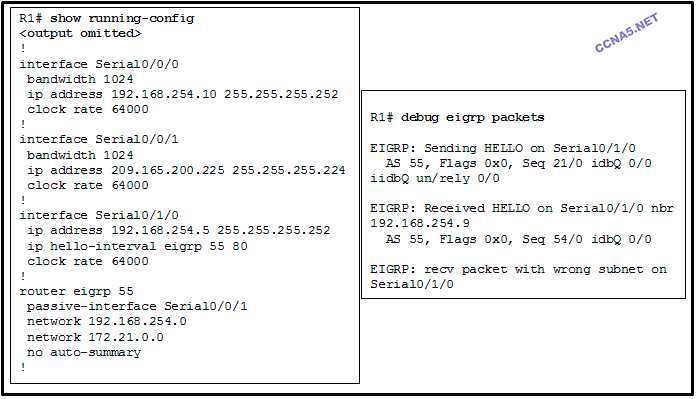 Refer to the exhibit. After the configuration shown is applied on router R1, the exhibited status message is displayed. Router R1 is unable to form a neighbor relationship with R2 on the serial 0/1/0 interface. What is the most likely cause of this problem?

The passive-interface command should have been issued on serial 0/1/0.

The IPv4 address configured on the neighbor that is connected to R1 serial 0/1/0 is incorrect.*

The hello interval has been altered on serial 0/1/0 and is preventing a neighbor relationship from forming.

The network statement used for EIGRP 55 does not enable EIGRP on interface serial 0/1/0.

The networks that are configured on serial 0/0/0 and serial 0/1/0 of router R1 are overlapping.

17
What is a characteristic of manual route summarization?

has to be configured globally on the router

18
Fill in the blank. Do not use abbreviations.
The » passive-interface » command causes an EIGRP router to stop sending hello packets through an interface.

20
Fill in the blank. Do not use abbreviations.
What is the command that should be issued on a router to verify that EIGRP adjacencies were formed?​

Launch PT   Hide and Save PT
Open the PT Activity. Perform the tasks in the activity instructions and then answer the question.

R1 and R2 could not establish an EIGRP adjacency. What is the problem?​

EIGRP is down on R2.

R1 Fa0/0 is not configured to send hello packets. 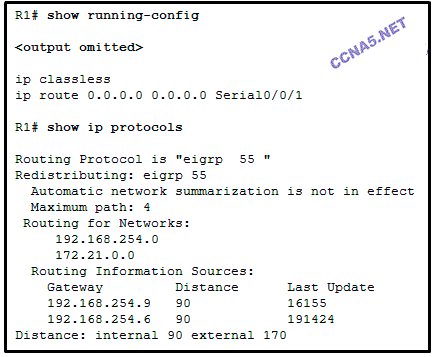 There are no EIGRP neighbor relationships on R1.

The command default-information originate has not been issued on R1.

The network statement for the ISP connection has not been issued.

The command redistribute static has not been issued on R1.*

The ip route command must specify a next-hop IP address instead of an exit interface when creating a default route. 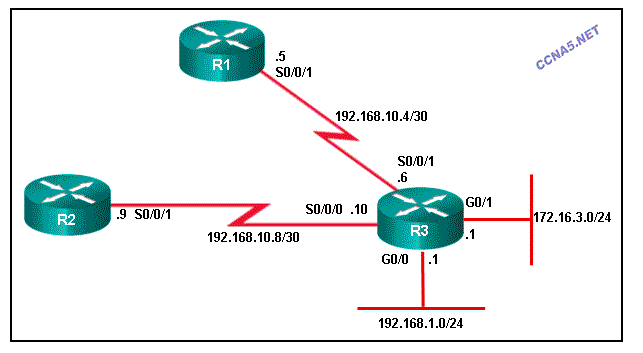 Refer to the exhibit. All networks are active in the same EIGRP routing domain. When the auto-summary command is issued on R3, which two summary networks will be advertised to the neighbors? (Choose two.)