1
Which two sources can be used to determine the amount of currently installed RAM on a computer? (Choose two.)

3
Which statement is true about version control of files that are transferred between a Windows laptop and a Windows desktop PC?

Windows does not allow files with the same name to exist in the same folder.
In order to make a copy of a file on the laptop, you select the file and choose Cut.
If the files have the same name, but one is newer than the other, the new file will automatically overwrite the older file.
If the files are exactly the same and have the same modification dates, Windows will not prompt you about replacing the file.

4
Which attribute of a solid state drive would be an advantage when being used in a laptop?

5
A technician is trying to repair a laptop where the images on the display can only be seen when looking at the screen from an angle. What needs to be done to fix the problem?

6
Which maintenance task can be performed to speed up file access on a laptop?

7
Why should care be taken when charging and handling a laptop battery? 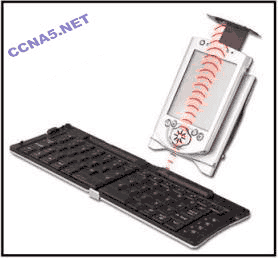 Refer to the exhibit. Which type of connection is being established between the PDA and the infrared keyboard?

10
Which laptop component is typically considered a CRU?

11
Which type of encryption key should be enabled on WPA-compliant devices?

12
A laptop fails to start after a new hard drive has been installed. What are two possible causes of this problem? (Choose two.)

13
A laptop that previously worked now fails to boot. The cursor fails to appear on the screen. When a bootable DVD is inserted, the system still fails to boot even though it is set to boot from CD/DVD. The fan turns, so power is applied and the power light is on. The technician installs the hard drive in another laptop and it works there. What is the probable cause of the problem?

14
Which two types of batteries should be completely discharged and then fully recharged to remove the charge memory? (Choose two.)

15
What are two steps a technician should take before repairing a laptop? (Choose two.)

Ground to the power supply before opening the laptop cover.
Backup all data stored on the laptop.
Check the warranty to see if repairs must be done by an authorized service center.
Place a piece of tape over the CD laser so it doesn’t damage someone’s eyes when the laptop case is opened.
Disconnect the battery to insure it is not the problem.
Attach the AC adapter in case the problem is a defective battery.

16
Which acronym describes a laptop part that can be replaced by a customer?

17
Some keys on a laptop work intermittently. They sometimes type the letter and sometimes do not. What should a technician do to fix this problem?

18
A customer is unable to use a laptop on battery power for more than 30 minutes. What would a technician suggest to this customer?

19
Which three standard procedures must always be included in a preventive maintenance schedule? (Choose three.)

Disk Cleanup cleans the hard drive by placing files in adjacent clusters.
Disk Defragmenter is meant to be used when a computer has files that are modified, added, or deleted often.
Disk Cleanup performs tasks such as emptying the recycle bin, checking for missing applications, and verifying hard drive cluster integrity.
Disk Defragmenter provides a list of files that are the most fragmented, an estimated time to repair, and checkboxes to enable or disable defragmentation.

IT Essentials v4.1 Chapter 9 Exam 1 Which factor affects the …